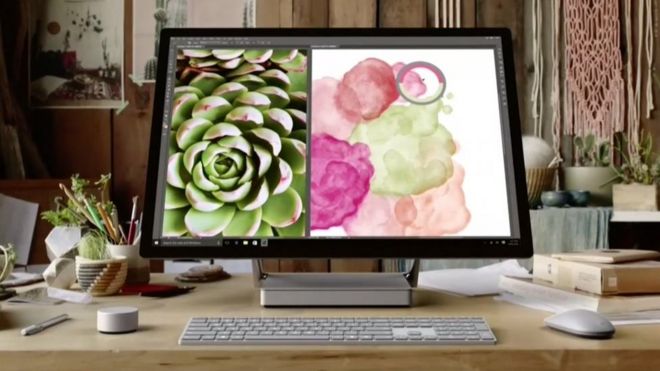 New 3D creation and editing tools are being added to the next edition of the Windows 10 operating system, including a revamped version of Paint.

The firm also revealed a range of new virtual reality headsets to encourage users to interact with their creations.

One expert said the moves would help prepare consumers for more radical augmented reality features, which are still under development. 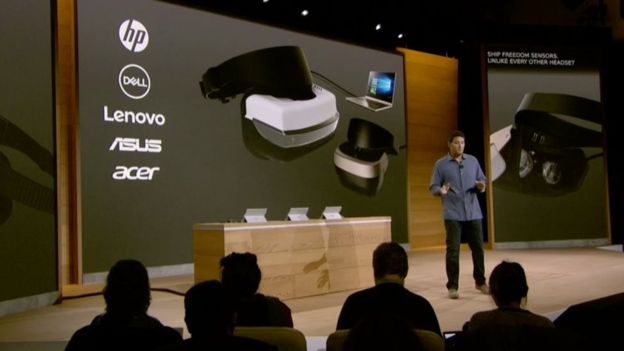 It features what is said to be the thinnest ever LCD touchscreen and has an accompanying dial controller, which can be placed directly on the display or used at its side.

An on-stage demonstration of the 3D Paint application showed how a stylus could be used to draw 2D-graphics that were automatically given depth by the software. Photographic elements could also be added to the design, and parts could be animated. 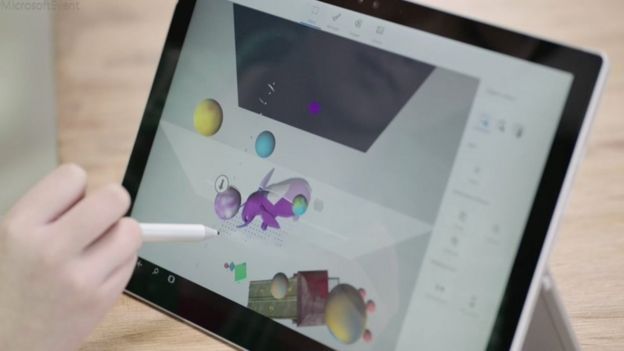 To create 3D models of real-world objects, Microsoft said it was developing a smartphone app that works by waving the handset around the desired item.

The finished creation can be added to Powerpoint presentations, shared on Facebook and other online sites or placed within a virtual reality environment. 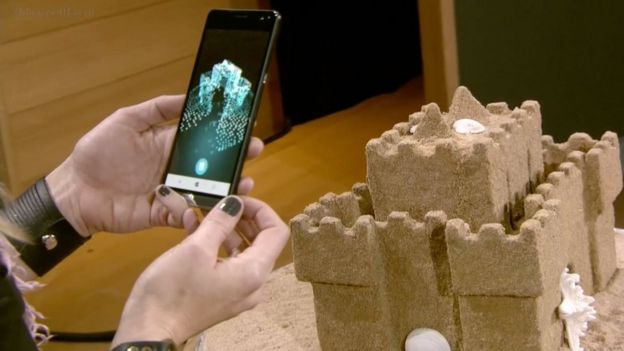 “VR is hot with consumers at the moment, and Microsoft is making sure it is not missing the boat from an ecosystem perspective and leaving it all to Google,” said Carolina Milanesi, a consumer tech analyst at Creative Strategies.

“3D also resonates with consumers. Focusing on creating content and sharing that content is a good way to have them start to think about mixed-reality, preparing them for the HoloLens headset.” 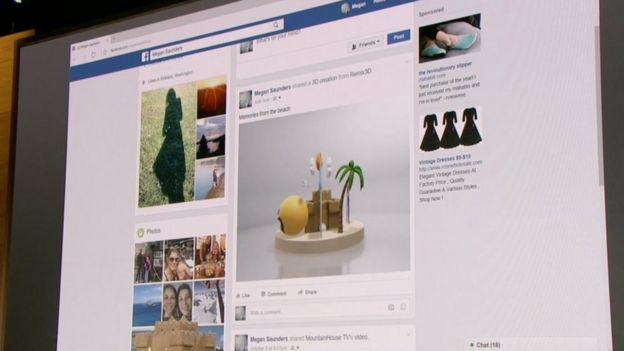 It said the lowest-cost model would be $299 (£245). That is several times cheaper than the video games-focused Oculus Rift and HTC Vive headsets already on sale.

They offer a staging post until the firm launches a consumer edition of its HoloLens headset. The kit superimposes graphics over real-world views, moving them in turn with the wearer’s head movements so that they appear to be part of the environment.

Versions of the HoloLens are already on sale, but cost between £2,719 and £4,529, and are currently targeted at developers. 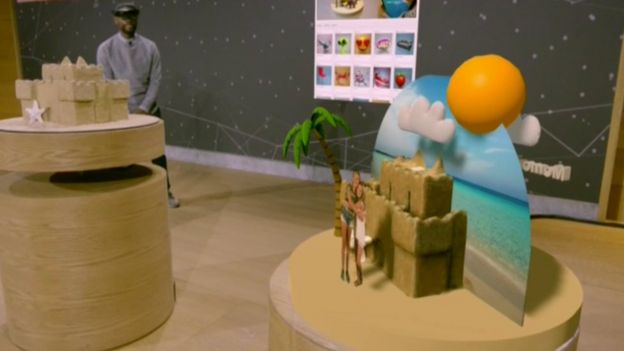 The Creators Edition of Windows 10 is due for release early next year and will be provided as a free upgrade for computers already running the software.

Its other new features include:

Microsoft began the final stretch of its New York event by unveiling a new laptop, the Surface Book i7, which it said offered twice the graphics power of the last model and up to 16 hours of battery life.

But it dedicated most of the section to the new Surface Studio desktop computer. 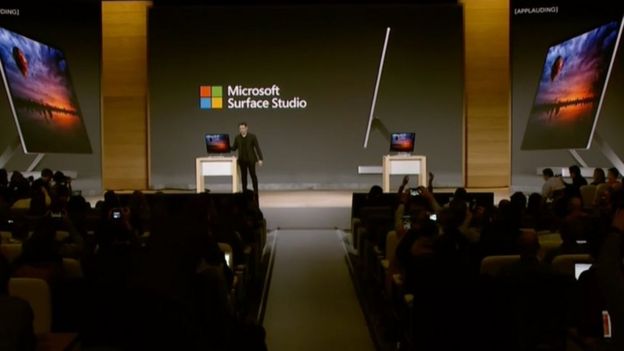 The machine features a touchscreen held to a box below by two adjustable chrome arms.

Microsoft claims the display is “best in class”.

Its 192 pixel-per-inch resolution is slightly lower than that of the top-end iMac. But it compensates for this by being an inch larger than Apple’s model, as well as appearing to be substantially thinner thanks to most of the machine’s guts being placed at its base. 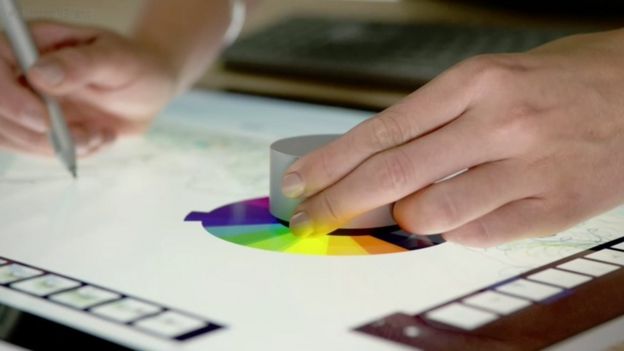 The PC is sold with a wireless mouse, keyboard and stylus, but is distinguished by a fourth peripheral: the Surface Dial.

This can be spun to carry out functions such as skimming through colours, adjusting the volume or flipping through pages.

It provides vibration-based feedback as it is used. And when placed on the screen, it brings up a graphical interface within compatible software, providing the user with a new way to select from commands. 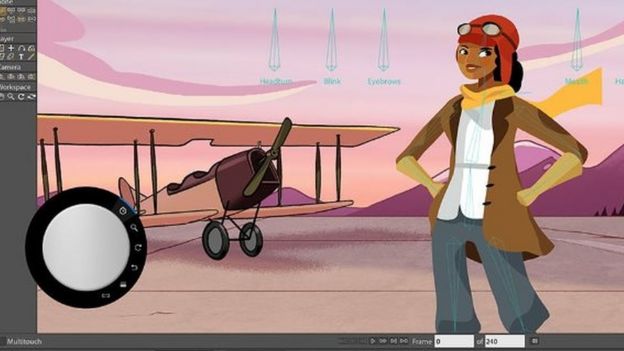 “But it should meet the needs of most creative experts – the intended target market – and is priced for [users] who want something very cool and unique.” 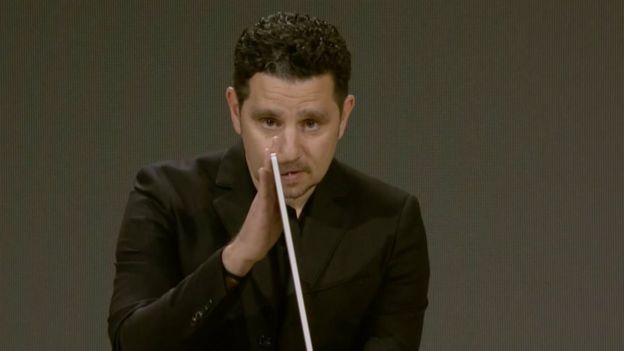 Although Microsoft has had some success with its earlier Surface line-up, wider sales of PCs and tablet computers are experiencing their second consecutive year of decline.

The consultancy Gartner has forecast that after an 8.7% fall this year, sales will see a smaller dip in 2017, and then return to growth again in 2018.

Three US hospitals are infected with ransomware, which encrypts vital files and demands money to unlock them. Source: Three US [...]

The ransomware that knows where you live – BBC News

A widely distributed scam email that quoted people's postal addresses links to a dangerous form of ransomware, according to [...]

Microsoft beat Apple in terms of online tablet sales, according to a report. The Redmond-based tech giant managed to [...]

The old tech support scam where a fraudster pretends to be a Microsoft agent takes a new turn. A new [...]

Microsoft has given large grants to organisations in the UK in a bid to boost youngsters’ computer skills. The money, [...]

Microsoft and HP team up to transform tech in schools

Microsoft and HP have teamed up to transform how technology is used in schools. The companies have chosen 61 schools across [...]

Li-fi, a faster way to deliver internet access, has been tested in a real-life, working office in Tallinn, Estonia. Source: [...]

A data breach at large UK software company Sage may have compromised personal information for employees at 280 UK [...]

Ever wondered how fast a rocket car made of foam can go? Well, wonder no more, as that’s exactly [...]